It’s where he was born, where he lived, and where he fell in love with the forests and all the animals that dwell (do they still?!) in it. Even though his stories were about killing man-eaters, his love for the people shines through in every minute detail he wrote.

I hated everything about Nainital, the dislike starting even before I had reached the city.

We had reached Delhi at 8 in the morning, and it was already hot. The horrible roads from Delhi to Nainital, which literally broke our backs, just added to our misery. Once we were properly rested, we decided go out in the evening and check out Nainital.

Oh my god! The crowded roads and the never-ending stream of people. It took forever to reach the other side of the lake, a distance of only 2 kms. Our car was stuck in a one-way road, with no way of returning, for the better part of the day. Man, It felt like I was back in Bengaluru on a Monday morning :(

I wonder what Jim Corbett would think of the present day Nainital?! The crowd-filled streets and the honk-filled ambiance. Not much, I guess. He may not even recognise it as the same place where he had lived his life peacefully. About 22 kms from Nainital is Bhimtal. Smaller than Nainital, and absolutely no crowd. Bhimtal can be considered the smaller cousin of Nainital. We enjoyed a quiet evening in Bhimtal the next day, and it was serenity personified. The Tal (meaning lake) in Bhimtal is like any other Tal. And like any other Tal, it has boats. Colourful ones!!

The boats somehow made me think of what humans have done to these forests, here and every else. Of the devastation we cause to nature, in the name of civilisation…

After staying for 2 days, we started from Bhimtal and reached Kausani at 9 in the evening yesterday. The route was a never ending stream of vehicles in both directions. And there was not much to be seen through the windows. As soon as we reached we went straight to bed, for we were too tired. The roads are not so well maintained, and they tend to give you sore muscles all over your body.

I get up in the morning and see this… Who knew I would get to see this! 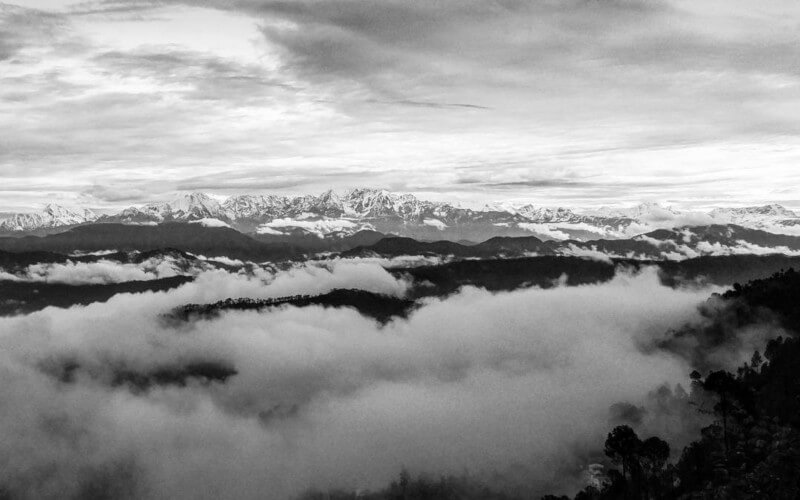 This photo doesn't do justice to the view we have from the room. It's only by being here can the view be really appreciated.

Kausani is breathtakingly beautiful and serene. The resort we stayed at is on the northern slope of a big hill and hence offers a bird’s eye-view of the surrounding valley. As you follow the hills and look farther and farther away, you will finally see the horizon where snowcapped mountains kiss the skies.

One cannot help but feel puny and insignificant in front of that great wall of mountains. And feel a calm that is quite difficult to express. A calm of knowing that I’m just a teeny tiny part of this huge universe. My short life, quite eventful in my eyes, is but a blip in the course of ever-moving time.

Come to the mountains, they say.

Felt nostalgic about my visit to Nainital, 17 years ago.

Ah, 17 years is a long time ago. I’m sure Nainital was still the serene place that it was in Corbett’s time when you visited!

Interesting piece! Keep it up

By the way, have you ever been to Nainital?!

Gatsby and the 'window' variable

Where did the 'window' go? And how can I get it back?!

reCaptcha v3: Do You Need It?

For greater control over bots/spam handling, use reCaptcha v3!

Automate publishing of new comments submitted to your static site.

Use CircleCI to build a CI/CD pipeline for deploying to a static site.